After our short visit to El Chalten to view the Mount Fitzroy range we had to get back to Puerto Natales to travel to the Chilean lake district through the Patagonian fjords on the Navimag Ferry.   Leaving in the early afternoon we made our way back to El Calafate where we would stay one night at the fantastic Solares Del Sur.  When we were warmly welcomed and saw our lovely wooden cabin just outside of town we wished we had booked longer here!   After filling up on the fantastic dinner the hotel restaurant delivered to our cabin we were ready for bed.

The alarm woke us early the next morning and we checked out.   Our taxi arrived on time to take us to the bus station and before long we were on the five-hour journey across the border back to Puerto Natales in Chile.   There was a slight hiccup at the Chilean border control as Dad had declared we were not bringing food into the country only to find we had four apples in one of the bags!  He had to fill out a new declaration form and was made to feel like he had committed a serious offense for five minutes before we were back on board the bus.

For the one-night stay in Puerto Natales we had booked into the Patagonia Adventure Hostel. When we were in town previously to visit Torres Del Paine on a day trip we had stayed outside of town, close to the bus stop.  We knew the hostel was close to our favourite restaurant in town, Mesita Grande, and it didn’t take us long to find our way there for some delicious food.   The kids watched movies on the laptop that evening as Mum and Dad prepared everything for boarding the ferry the next day.

The following day we checked out of the hostel and stored our bags. We had to check in to the Navimag Ferry at their office in the bus station in the afternoon.  There was a bit of confusion as to whether we could check our bags in now or not.   We spent the morning walking around Puerto Natales until Mesita Grande opened its doors for lunch.   Once we had filled up we took a walk to the bus station and checked into the ferry.  They informed us that we had to be back at around 8pm for a free bus to the ferry and that we could leave our bags with them.   So, we grabbed a taxi and headed back to the hostel for our bags, then a further taxi back to the bus station to leave our bags at the Navimag office.   A third taxi then took us to the waterfront park where the kids could play and kill a little more time.

At this point we realised that a few items were missing. Our son had left his lightweight raincoat somewhere and our daughters drinking bottle was also missing.   These were either back at the bus station or in one of the three taxis we had taken.   Que a shopping trip into town to purchase a new waterproof coat for our son and some new walking boots for our daughter (as we had noticed her shoes were too small).  After the stress of getting these items at the last minute we had one final meal at the Mesita Grande before heading to the bus station.

While waiting for the free shuttle bus to the ferry we met a fantastic same-sex couple from San Diego and their children, who would also be on the ferry with us.   Our kids immediately sat with their son and played Lego until it was time to take the shuttle bus.   It was a short ride to the docks and it was not long before we were being greeted aboard the ferry and shown to our cabin by the staff.  We had a small cabin with two bunk beds.   Initially it was difficult to unload our bags and store items in the short space but we soon got the hang of it.   There was an initial welcome meeting in the canteen where the on-board naturalist explained what we should expect from the trip and gave us all the information we would need.   The meeting ended late and we were all tired from a long day when we finally got to our beds at 11pm.

Our sleep was disturbed by the trucks being loaded on to the ferry during the night and when the alarm went early in the morning we were not ready to wake.   The ferry has set meal times though so we made our way up to the canteen, only to find that Dad had got the time wrong and breakfast wasn’t for another half an hour!   Breakfast was filling and we caught up with our new friends from San Diego and other travellers before we all headed out on deck to take in the views of the Patagonian fjords we were sailing through.   As people filtered back inside Dad spotted a couple of dolphins making their way towards the boat from the shore.  They swam past the front of the ferry as it made its way along.

We were to spend three days on the ferry and entertainment was in short supply.   The kids were off playing with their new friend and getting their faces painted, while in the canteen a 1,000-piece puzzle was started and people were assisting every now and then.   Dad took the opportunity to catch up on some blog writing while Mum chatted to various people around the ferry.   The on-board naturalist gave talks in the pub in the afternoon which Mum attended on the first day.   As lunch and dinner came and went we found that the first day had gone surprisingly quickly. 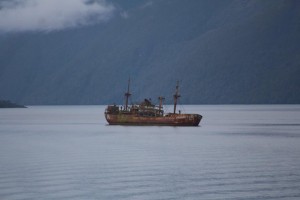 A shipwreck on route

The next day we were woken by the naturalist on the speakers letting us know that we would be passing a shipwreck. Mum jumped out of bed and onto deck for the photo opportunity, while the rest of us were a little slower in rising for breakfast.   The morning was much of the same as the first day but in the afternoon, around 2pm, we headed out of the fjords and into open sea.   We stood on deck and watched the two meter waves rock the boat while looking out for marine life.   Far off in the distance the spray from whale’s blowholes were spotted and everyone came out to get a better view.   In the distance, a couple of pods of orcas could be spotted.   As the afternoon went on we all started to feel the effects of sea-sickness.   Despite taking pills and the seas not being too rough, Dad was the first to decide he was going to lie down.   Mum and the kids soon followed suit and we spent some time riding it out in our beds, the kids watching movies on their tablets.

Our third day on the ferry was our last day. The days were getting a bit longer now as we stretched the imagination to entertain ourselves on board.   The kids were still having fun with their new friends, or watching movies.   We all go to go into the bridge and looked at the navigation equipment helping the captain and crew on our voyage.   Our son loved it when we spotted a few sea lions swimming in the open water. That evening, after dinner, the naturalist addressed us all and told us what would happen early the next morning when we left the ferry.   After packing our bags ready for the morning, we headed out on deck where we chatted to our new friends from San Diego (who were drinking ‘grape-juice’ smuggled on board the alcohol-free ship!) while our kids all ran around and played together.

Sleep was disturbed again as the boat docked in the early hours and the trucks all disembarked.   Mum and Dad stirred in the morning, hearing others walking around the corridors of the ship.  Our alarm had not gone off yet, but Mum returned from the toilet in a panic as we had to be off the ship in twenty minutes!   For some reason, our phones had turned off and therefore the alarm had not gone off!   In a panic, we somehow managed to wake the kids, get dressed and be out on deck ready to disembark on time.

As we left the ship to board the busses that would take us to Puerto Montt we said our goodbyes to the many new travelling friends we had made on board from all nationalities.   Now that the three-day voyage was over we knew we were leaving behind the unique experience of travelling aboard the Navimag ferry through Patagonian fjords and heading to our next adventure in Puerto Varas…

Puerto Varas and the Osorno Volcano 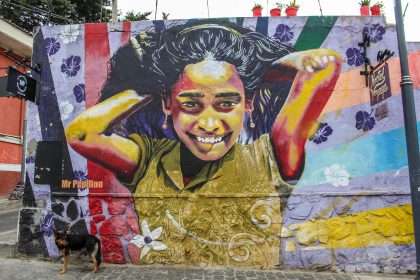 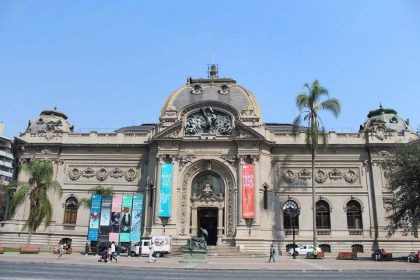 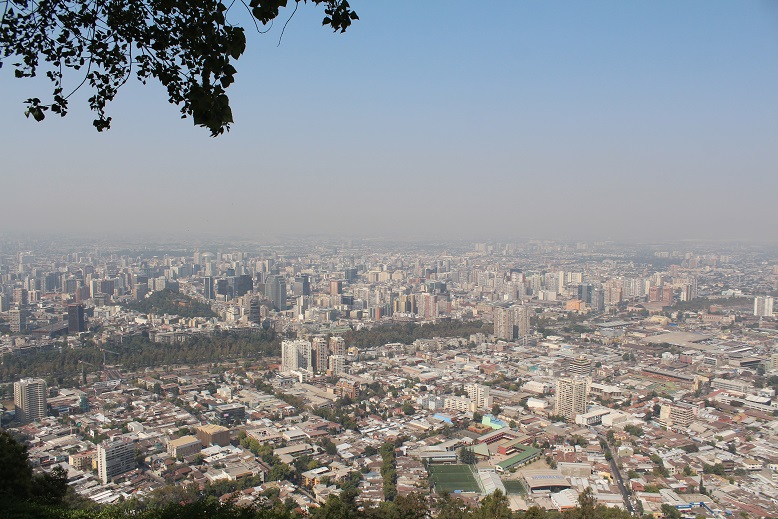