Our taxi driver picked us up from the Ella Corner Inn at 10am and we set off down the windy hillside roads from Ella towards our next destination, Udawalawe, where we would be spending two nights.   Our main aim while there was to organise a jeep safari to Udawalawe National Park to view Asian Elephants in the wild.   The driver was a chatty fellow who had set up his own small tour company, so was keen for us to stop off on the way to chat to his jeep driver and take the safari with his company.   We said we would have a word and if the price was high then we would look elsewhere.

On the way we stopped off to pick up the driver’s wife and six-month old daughter on the way and just before we arrived at the Elephant Fence Guesthouse we stopped off to chat to his safari driver. A young man came out and greeted us with a smile and showed us his jeep before negotiating a price for his services.   We agreed to LKR5500 (£25) for the use of driver and jeep for a morning safari and then a trip to the Elephant Transition Centre in the afternoon.

With that settled we arrived at the guesthouse shortly afterwards and were shown to our room.   The guesthouse was a short way from the entrance to the national park, so we wouldn’t have to go too far in the morning.   The location was great for Udawalawe national park, but there was nothing else around, especially shops to buy snacks for hungry children!   We decided to have dinner at the guesthouse but spotted that a short walk down the road led to the Elephant Trails Hotel which had a restaurant (and a lovely looking pool!).  We would try that out after the safari.   The kids spend the afternoon doing some learning and playing around the guesthouse grounds before we had a lovely potato curry for dinner and then early to bed.

At 4:45am the alarm went off and we had to get ready and wake the kids for the safari.   We thought we would struggle with the kids, but they were up and ready along with us.   It was still dark as the young driver and his jeep arrived at 5:30am to pick us up.   We were one of the first to arrive at the Udawalawe national park and after a short wait we paid the entrance fee to the park (LKR7700 / £38.50) and were on our way looking for elephants. 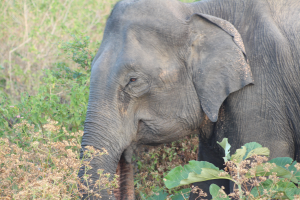 It didn’t take long. Within 10 minutes we rounded the corner to find the road blocked by two male elephants.   The driver explained how to tell the difference by the shape of the back.  A female has a square shaped back whereas a male has a more triangular shape.  From that point on we saw a LOT of elephants as we drove around the park.  They came so close to the jeep at times and both adults and kids loved it.   Mum needed the toilet halfway through and despite the rules stating that getting out of the vehicle was not permitted on the 3.5-hour safari our driver went down a secluded, bumpy road and checked for wildlife before giving the all clear for a bush toilet stop!

We saw eagles at a distance, wild boar and water buffalo.  Stopping at a lake the driver pointed out the crocodiles to us all.   He told us that he was having fun because the kids were on board and he put them both up on the roof of the jeep for a better view.  He explained that yesterday he had two couples who were quite rude and he wasn’t too keen to take us when his boss had arrived with us in the taxi yesterday. Luckily for him we had restored his faith in his job it seems.  As we drove to leave the park we saw an eagle up close which topped off our morning. 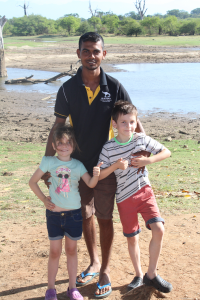 The driver dropped us off at the Elephant Trails hotel where we would have breakfast and agreed to pick us up for the Elephant Transit Centre in the afternoon.   At breakfast the kids freaked out over flies again.  This has been a real issue in Sri Lanka for our two who are just not used to flies buzzing around them and onto their food in the UK.   Complete meltdowns have happened at mealtimes and it’s been a real parenting struggle to keep the kids at the table, without tears and finish their meals.  This morning was no exception but with no shops for snacks around the area we managed to fill them up as much as we could.

After a mid-day rest and some schooling, we were picked up again at 2:30 by the driver and made our way across a very windy Udawalawe Reservoir to the Elephant Transit Centre. The centre cares for orphaned or injured elephants and aims to rehabilitate them so that they can be released into the national park at some stage.  We got there for feeding time at 3pm and witnessed the little elephants making their way to be fed with milk.   After watching feeding for about half an hour we looked around the information centre before heading back to the jeep.  We asked the driver if he could take us into town to buy some grocery items and he was more than happy to agree.   As with all Sri Lankans we had met, he was loving having the children around and our two got to ride in the front of the jeep as we went into town.  Dad jumped out and went shopping while the driver moved the jeep out of the sun and went shopping himself for ice creams for the kids.   They didn’t deserve it as while he was gone they started punching each other in the front seat and by the time he returned he found them both in the back of the jeep separated!  It was a race against the sun to eat the ice creams before they melted.  Judging by the state they were in afterwards we think the sun won!

As the driver dropped us off he said that if he didn’t have to do a safari the next day he would come with us all to Mirissa on the south coast with the taxi driver that he had arranged for us and that is exactly what happened. The kids loved having him chat to them in the car for the two-hour drive to Mirissa and we were all sad to say goodbye when we were dropped off at the hotel.

We had pre-booked the Vacanza Hotel in Mirissa for five nights as it was well within our daily budget. When we were shown to our room we were pleasantly surprised.   The room was massive, clean and had a balcony from which you could just about see the sea and could certainly hear it.   It was a short walk to the beach too, making it the perfect location for our stay. 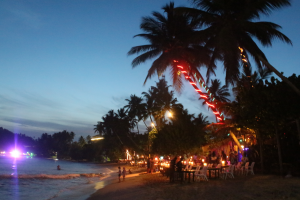 Our days in Mirissa were lazy.   We visited the beach in the morning and late afternoon either jumping in the waves or in an area at the far side of the beach where the waves were shielded by a coral reef making the water calmer for the kids to swim in.   During the middle part of each day we returned to the hotel and either did some school work with the kids or just relaxed.   The evenings were spent eating dinner in one of the many beachside restaurants, our favourite being the Mirissa Eye.   Five days went by and we were recharged ready for the next stage of our journey, Galle….. 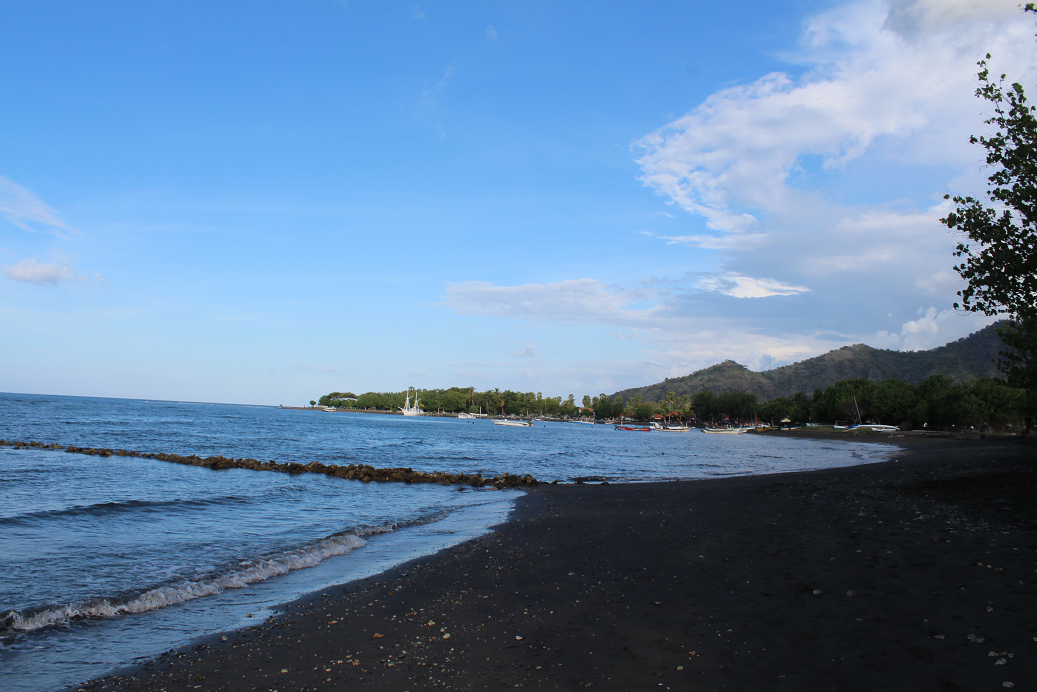 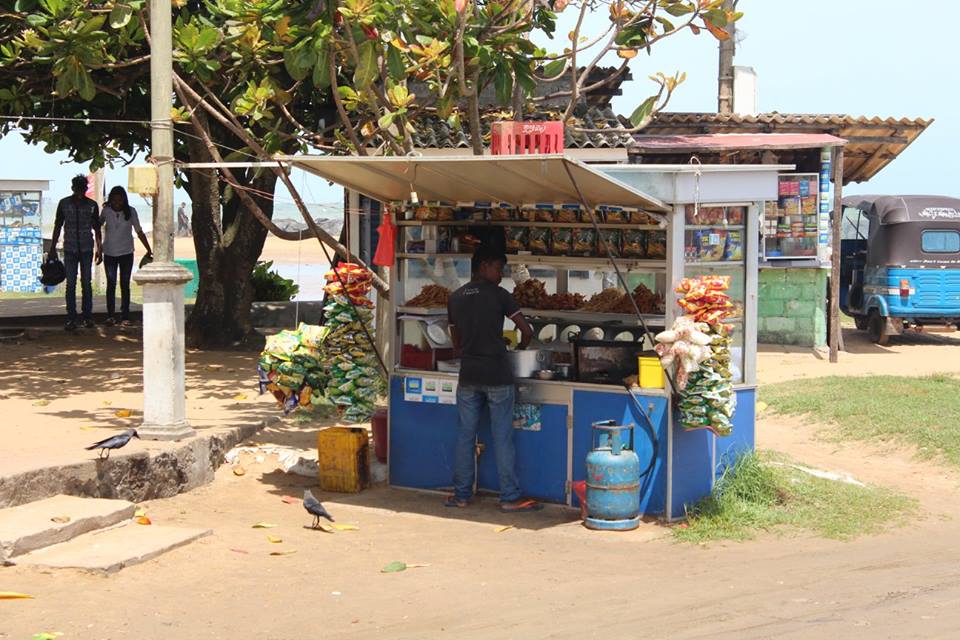